Instructions for configuring Firewall rules for virtual servers in the Serverspace control panel.

Using a firewall directly from the control panel, you can control access to the server, network data packets. This option is not separately charged and is included in the server price.

There is currently a limit of 50 rules, if this limit is not enough for you, then you can increase it by request for technical support.

To avoid a conflict of firewall rules and their proper configuration, you need to understand the operating procedures of existing firewalls. First, you can set up a firewall for a private network. Secondly, for the server through the control panel. Thirdly, you can configure the internal firewall, for example, for Linux via iptables, for Windows — built-in.

We do not recommend the simultaneous use of a server-level firewall and an internal software: 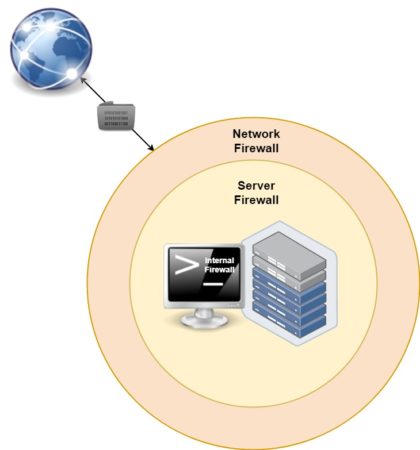 The firewall configuration is available for all VPS and is located in the server settings in the Firewall section.

Important:
— the order of the rules matters, the lower the order number of the rule (the higher it is on the list), the higher its priority. You can change the sequence of rules using Drag and Drop by dragging the rule with the left mouse button to the desired position;
— by default — all data packets, both incoming and outgoing, are allowed.

A window for adding a rule will open before you. These fields must be filled in:

In our example, the rule blocks all packets entering the server.

For the created rule to take effect, you need to save the changes using the button Save. You can create several rules and then save everything at once.

The priority of rules

The lower the sequence number of the rule (the higher it is on the list), the higher its priority. For example, after a prohibition rule has been created for all incoming traffic, create a rule that allows you to receive incoming packets on port 80 of the Tcp protocol. After saving changes with this configuration, this port will also be unavailable, because the prohibition rule has a higher priority.

To change the priority of rules, use the left mouse button to drag the allowing rule to the first place and save the changes.

After saving, the sequence numbers of the rules will change, and their priority will also change.

Now the firewall configuration allows receiving packets via Tcp protocol on port 80, the rest of the packets will not pass.

Installing and configuring a VNC server on CentOS 7
CentOS
How to configure a DHCP server in Windows Server 2016
Windows
Have questions before you deploy? Contact our Customer Success team to get answers.
Create Account